Five Stars for “No Time for Goodbye” by Linwood Barclay

No Time for Goodbye
by Linwood Barclay (Goodreads Author) 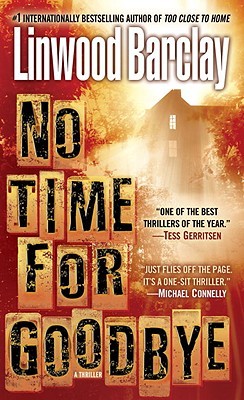 Linwood Barclay has a way with weaving a story, and

“No Time for Goodbye”

Five stars for this book.

How would your life turn out if you were a teenager who woke up and found your family gone? – vanished without a trace!

Twenty-five years later, despite never having discovered what happened to her family, Cynthia begins to feel she is being watched and that someone is after her, maybe realizing that they had missed a family member and they need to now finish the job they had started.

Cynthia is married now and has a daughter, whom she over-protects, and when strange things start happening, she becomes paranoid. Those closest to her think she is becoming unhinged, and she begins to wonder who she can trust, including her husband, the man who loves her and has always been so patient and supportive.

Reading this novel will leave you sitting on the edge of your seat and what unfolds will leave you in shock! Another job well done by Barclay. Set aside a few hours to finish this book because you won’t want to put it down!