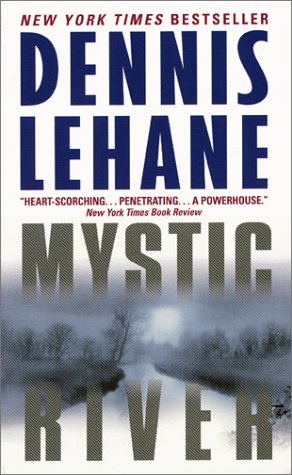 Having watched the movie “Mystic River” twice, as I read the book, I felt I had actually read it before. The actors who portrayed the characters that Dennis Lehane crafted were right there with me as I turned the pages.

This is a tale of three children whose lives were intertwined in their youth and then of their living with the ghosts of the past. Three very different children: Jimmy, the rebel, the tough and fearless boy; Sean, the boy who knew he was meant for something better in life because his parents told him so; and Dave, the oddball kid that trailed along with Jimmy and Sean, always trying to fit in. Little did these three boys know that that day they played on the street – a day like any other – that particular day would change and affect their lives forever. The day when 11 year old Dave is driven away in a car by two men posing as police officers, while Jimmy and Sean watched in horror.The days that followed…when Dave escaped his captors and returned home. Home to a mother who chose not to deal with what happened to her son, and in her not dealing, poor Dave had to bury his horrific ordeal. On top of his mother’s lack of empathy for him, the kids at school began to isolate him as well, calling him names, as though what had happened to him had been his fault. Even Jimmy and Sean weren’t there for him.

Time moves forward to adulthood. Sean is a police officer; married and separated, now married to his job, but still yearning for the woman he loves. Jimmy became the leader of a gang by the time he was 17, married, had a child, went to jail, lost his wife to cancer, and when he got out jail, Jimmy became a law abiding citizen for the sake of his daughter, Katie. Jimmy remarries the sister of some of his former gang members, and they have two daughters. He runs a local corner store. Dave manages to find some solace in high school when it is realized he is a great pitcher. Dave settles down and marries, and has a son. He is a devoted father, and a good husband, but he always seems to be tortured by something. He never seems able to hold on to a job for long, so he and his family just get by. Jimmy’s and Dave’s lives are intertwined by the mere fact that their wives are cousins.

However, the demons begin to rise to the surface, and in doing so, they bring these three childhood friends together again – but it was not a happy reunion. Jimmy’s daughter, Katie, is murdered. Sean is called in to help solve the crime. Jimmy promises his dead daughter that he will see justice done for her. At the same time, Dave’s demon begins to consume him, and he begins to act out of his normal demure character. As Sean and his partner work the case, Dave’s inconsistent story of what he did the night of the murder begins to cast a dark shadow over him as the possible murderer.

I could go on and tell you more, but I don’t want to spoil the story for you. Read the book, watch the movie – you will get a great insight into the lives of ordinary people, their emotions, and to what extent they will go to protect those they love. Mystic River will hit you hard with the human elements, with its reality.

Peace in the ForestMary's Musings, Writer On The Run