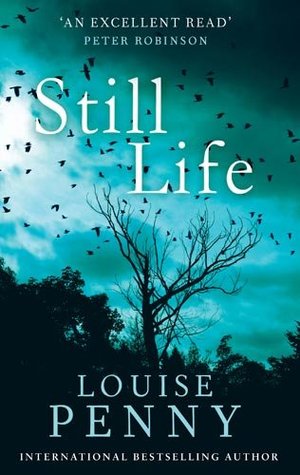 “Still Life” by Louise Penny gets a three star from me. The novel was enjoyable enough for me to want to finish it, however, I had a difficult time getting into it, and there were a few times when I almost put it down and moved on to another read.

“Still Life” has been described as a Cozy Mystery, and I can see this from its setting in a small rural village, Three Pines, in Quebec. The book starts off with Jane Neal, an aged spinster/former school teacher/wanna-be artist, meeting an untimely and suspicious death. Enter Chief Inspector Armand Gamache from Quebec, dragging along a young agent, Yvette Nichol, who wanted to become a detective. In all truth, I have no idea why this character was even in the book – she added nothing to it, and to me, she seemed very superficial and unrealistic for someone who was already a police agent.

Clara and Peter lived next door to Jane, and Clara was Jane’s best friend. Clara and Peter were both artists and were jurors for paintings to be accepted for show at the gallery of Arts Williamsburg. Jane, who had painted all her life, but had never shown anyone her work, had decided to enter a piece. The jury was split, some thinking the painting juvenile, while Peter, upon closer inspection, found something fascinating about the piece. Eventually, it was accepted. With the acceptance of the painting, Jane asked a select group of friends to her house for a party – into a part of her home where she’d never invited anyone before – not even her best friend, Clara. However, before the party could take place, Jane met her demise.

Ben Hadley, another main character, is Peter’s best friend, and also an artist. He was the one who found the body. Enter several other characters in the small town, none of whom I was able to relate to in a profound way. When reading a story, I like to be able to get to know the characters; I want them to jump out of the pages at me and tell me who they are. I found this to be missing in “Still Life.”

On a positive note, I found some of the scenic descriptions to be interesting, and I was intrigued by the description of the painting Jane had done. Of course, as time passed, and it was finally confirmed that Jane’s death was not an accident, it was realized that the painting might unveil who the killer could be.

I shall not elaborate further. “Still Life” was interesting enough for me to finish, and if you are looking for something light to read, cozy on up with a cup of your favourite beverage and turn the pages.

The Girl on the Train – Four StarsMary's Book Reviews